Tuberculous Imaginaries is a response to a kind of medical image perpetuated, in part, by the rhetoric of the medical museum. These institutions promote a spectacular image of the human body, which sees it as something that stirs excitement and fear, curiosity and revulsion for the viewer. Whether it be early modern science’s “book of the body”, the rise of the Parisian method of anatomy and the medical library, or the contemporary posthumous sideshow of Body Worlds. An implicit product of the grand staging of the human corpse, is the issue of its sourcing—where did they acquire the organs that are sealed in spirit? And from whom did they pull the heart, bone, or sample of skin? Undergirding much of modern, western medical science is a silent actor: the patient from which knowledge, material, and argument is extracted, excised, or harvested. The bodies that would be anatomized, pathologized, and (literally) objectified were most commonly the dispossessed, the racialized other, and the most desperately ill. The patient as clinical material reinscribed and reinforced the value of the medical class, enabling medical researchers to emerge in the eighteenth, nineteenth and twentieth centuries (depending on which western country you examine) as an esteemed (and profitable) profession.

Tuberculous Imaginaries responds to this history by reconceiving how the primary artifact can be engaged by a public audience. Seeing museological practice as more than an enshrinement of unique artifacts and dominant histories, I have chosen to draw on various different kinds of discursive materials associated with tuberculosis research at the turn of the twentieth century.

Each projector displays a different kind of image associated with the practice of normal science. Projector A shows pathological illustrations and clinical photographs. Projector B is made up of images of laboratories, pharmacies, and patient care; each image in this feed shows the body of medical researchers and practitioners, and care has been made to single out the doctors, nuses, and scientists, to make them the focus (sometimes at the expense of the image of the patient). Projector C consists of text generated with optical character recognition (OCR) of sections from the books that were excerpted for Projectors A & B’s video feeds. Rather than enshrine these artifacts as authoritative, concrete specimens, I have taken care to respond to and reflect on the rhetoric employed by medical professionals in their discourses between other scientists and the public. I have outlined the protocol for each video feed below, following a call for codifying particular modes of critique by Max Liboiron. 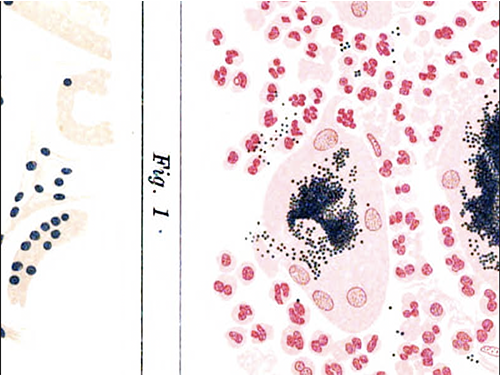 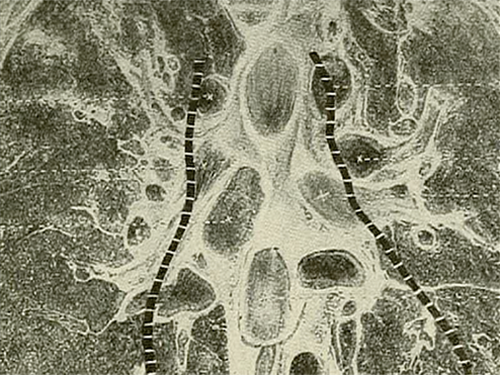 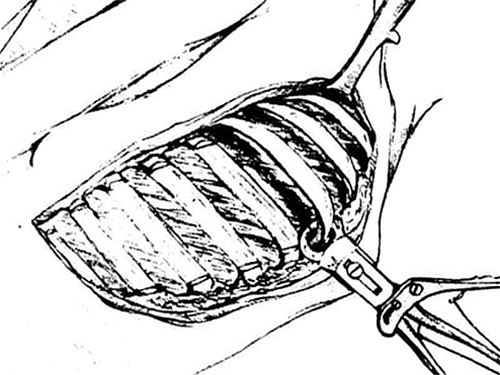 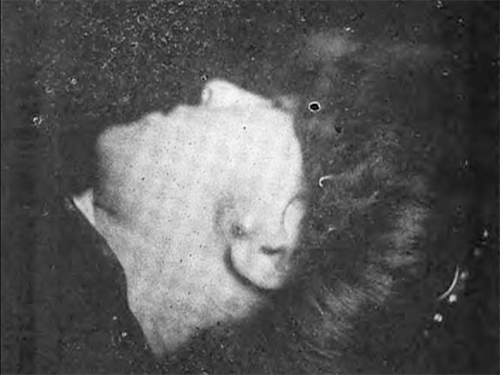 My intent for this installation is not to disrupt or disprove modern medicine’s epistemics. The public good provided by medicine is significant—especially as we claw our way out of a global pandemic. My interest in this project (and with my more traditional research) is to understand how medicine produces and is produced by certain classes of people: how medicine inscribes and describes what is sickness, and how this practice reinforces certain prejudices through the practices of scientific racism and universalism. 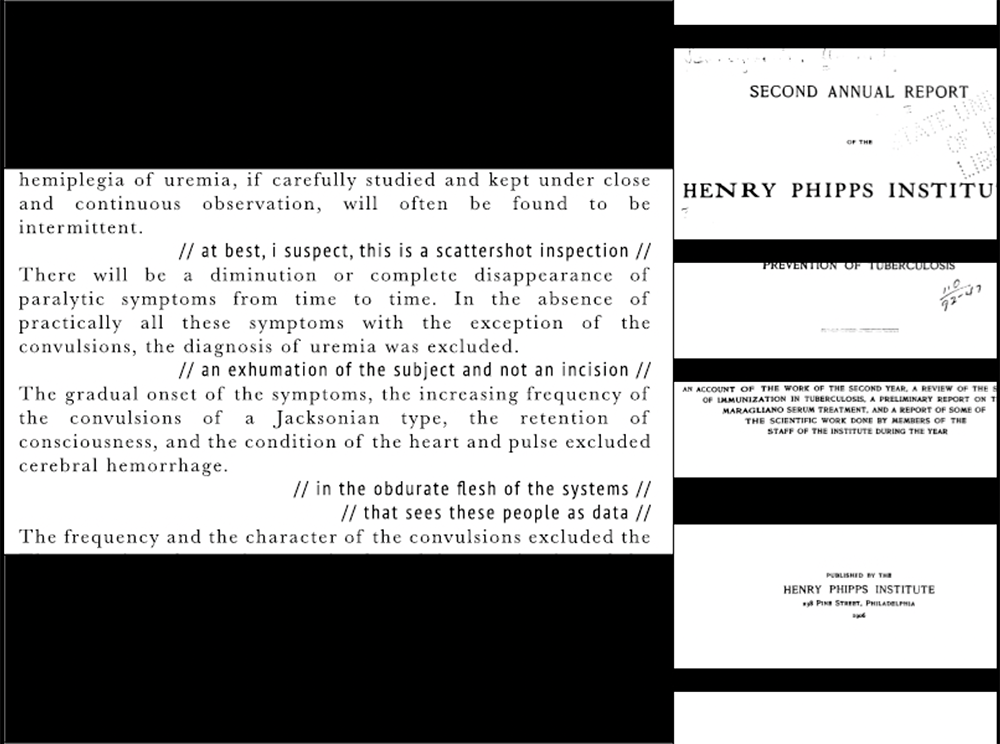 One final note: I have attempted to short circuit the spectacular exploitation of the sick, dying, and dead patient with care to not show the patient in exploitative, dehumanizing, and humiliating positions. In a previous photo essay (and early draft of the current project which was originally called Terminal Imaginaries) I more openly displayed the patient, and the various contortions the patient experienced when made into a specimen by medical researchers. I have left some images that show the patient in this installation, but at times I actively erase their physiognomy to emphasize the position of the doctor in those same frames. My intent for this project is not to continue to do violence to those who suffered from illness and the humiliations of the clinical gaze; instead, I hope to concretely show the ways medical professionals are imaged and imagined in relation to their work.

This project would not be possible without considerable help from my friends, colleagues, and family. I’d like to thank my colleagues who participated in the HASTAC Scholars Program, especially Joie Meier and Tim Etzkorn. I’d also like to thank everyone at the Institute for Digital Arts and Humanities for supporting my creative growth both as part of their institutional duties, but also as co-workers and friends, Kalani Craig, Michelle Dalmau, Vanessa Elias, Ella Robinson, Pouyan Shahidi, Maks Szostalo, and Sydney Stusman. I’d also like to thank colleagues in the Media School who have made this work possible—specifically to Mike Aaronson who has been a steadfast friend throughout the last few years. To my dissertation committee—Stephanie DeBoer, Joan Hawkins, Rachel Plotnick and Bret Rothstein—most of which were probably surprised by the materialization of this project, because I should have spent the last two months writing. Finally, I want to thank my mother and father for their never ending support for my creative endeavors (film school was a bust, and yet we soldier forward). Most of all, I want to thank Lauren, who has weathered my sleepless nights, ruminating on the project, who has nodded politely while I pontificate about some esoteric and inconsequential aspect of the design, and who has showered me with love and support as I continue to take on projects that are too big for one person to handle. I love you Lauren, and thank you for always being there.

Foucault, Michel. 1994. The Birth of the Clinic: An Archeology of Medical Perception. Translated by A. M. Sheridan Smith. New York: Vintage Books.

Richardson, Ruth. 1987. Death, Dissection and the Destitute. Chicago: The University of Chicago Press.

Sontag, Susan. 1990. Illness as Metaphor and AIDS and Its Metaphors. New York: Farrar, Straus and Giroux.

Carmody, T. E. 1909. The Differential Diagnosis of Lesions of the Mouth Due to Carcinoma, Sarcoma, Syphilis and Tuberculosis. Available on HathiTrust

Hall, Freeman. 1912. Tuberculosis and Allied Diseases: An Account of Their Origin and Treatment from the Earliest Times up to and Including the Present_. Kalamazoo: Yonkerman Company. Available on HathiTrust

Hamilton, James A. 1925. Pneumoconiosis—Three Cases Two of Silicosis, and One of Anthracosis with Tuberculosis Superinduced. Complete Histories with Temperature Charts, X-Ray Pictures and Colored Plates of Lungs. State of New York Department of Labor Bulletin. The Division of Industrial Hygiene. Available on HathiTrust

Mays, Thomas J. 1901. Pulmonary Consumption, Pneumonia, and Allied Diseases of the Lungs; Their Etiology, Pathology and Treatment, with a Chapter on Physical Diagnosis. New York: E. B. Treat & Company. Available on HathiTrust

Walsham, Hugh. 1903. The Channels of Infection in Tuberculosis: Together with the Conditions, Original or Acquired, Which Render the Different Tissues Vulnerable. New York: William Wood and Company. Available on HathiTrust